The Knox County Hospital District submitted a Prompt Payment Protection proposal to the Texas Department of Insurance in anticipation of the upcoming session of the Texas Legislature.

The hospital district, in a publicized battle with insurance companies in alleged unpaid reimbursements, said in a statement received Wednesday that violations of the Texas Prompt Pay statues "are now systemic and have forced healthcare providers into an endless loop of filing complaints at TDI and pursuing legal action simply to get paid for services rendered. KCHD has also called on state leaders to demand that TDI take a more aggressive stance in existing prompt pay laws." 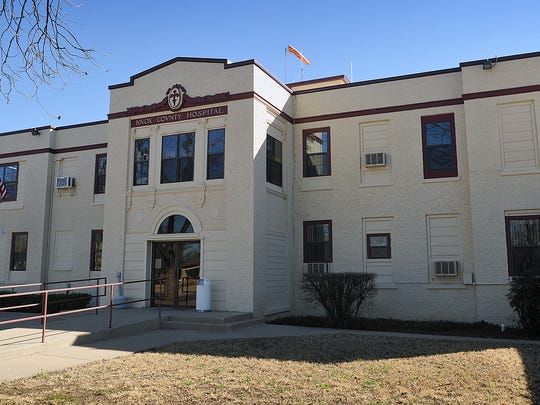 Buy PhotoThe Knox County Hospital in Knox City has been named to the list of Top 100 Rural Hospitals in America. The hospital district was founded in 1912 and the current hospital building was constructed in 1926. (Photo: Torin Halsey/Times Record News)
Knox County is about an hour southwest of Wichita Falls and 80 miles north of Abilene. The district has claimed Blue Cross Blue Shield of Texas has not paid more than $21 million in insurance claims. A Texas district judge in the fall of 2019 ordered BCBS of Texas to pay the insurance claims reportedly owed to the Knox County Hospital.

Some 23 Texas legislators, including Rep. James Frank, were recently sent a letter requesting intervention in getting the TDI to enforce the Texas Insurance Code Prompt Pay statute.

Knox County Hospital District had sought help from the Texas Department of Insurance in getting $12 million in alleged unpaid claims from Aetna U.S. Healthcare, a fight the hospital says goes back nearly two years. The hospital district has a pending complaint at TDI against Aetna, a release in May 2020 stated.

"It has been almost 20 years since Texas adopted its historic prompt pay measures. In the ensuing decades, insurance carriers have used a variety of means to steadily erode the enforcement of this critical measure which ensures that rural hospitals like ours get paid in a timely fashion,” Stephen Kuehler, KCHD CEO, said. “Our proposed Prompt Pay Protection measures are much needed for critical care providers like Knox County, which is the only hospital available to the residents of our county.”

Administrative changes to the code would restore the original intent of the prompt pay requirement, the release stated.

“We are grateful that TDI has solicited provider input as it makes plans for the 2021 Texas Legislature,” Kuehler added. “The COVID-19 pandemic has further exposed just how vulnerable our rural healthcare system is and we are already reaching out to other rural providers and look forward to working collectively with TDI to get this situation fixed in 2021."

“Aetna is clearly in violation of the Texas Prompt Payment statute. These are clean claims that have gone unpaid for two years. TDI, as the regulatory agency for the healthcare insurance industry, needs to hold Aetna accountable,” Dawson said. “If they don’t, we will have to spend more time and money in the courts just to get paid for services provided.”

A message was left with the Aetna's corporate marketing department before deadline. The Times Record News will update with any response.

View all posts by knoxcountyhealthcare